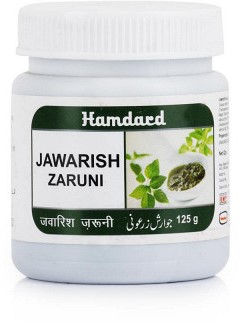 A number of drugs, both single and compound preparations are used widely in Tibb-e-Unani (Unani medicine) in the management of renal diseases. But such drugs mostly, have not been investigated for their described effects. Jawarish Zarooni Sada is one such polyherbal preparation containing 15 ingredients, mainly described to be diuretic and nephroprotective.This is used for kidneys dysfunction and also AID for digestion.

·        Ajwain : Ajwain, ajowan or Trachyspermum ammi—also known as ajowan caraway, Joyanin Bengali, oomam in Tamil,ajman,bishop's weedor carom—is an annual herb in the family Apiaceae (or Umbelliferae). It originated in India. Both the leaves and the seed‑like fruit (often mistakenly called seeds) of the plant are consumed by humans. The name "bishop's weed" also is a common name for other plants. The "seed" (i.e., the fruit) is often confused with lovage "seed". Ajwain is used in traditional Ayurveda primarily for stomach disorders such as indigestion, bloating, fatigue, abdominal pain, flatulence,diarrhea, and colic,along with respiratory distress and loss of appetite.In Siddha medicine, the crushed fruits are applied externally as a poultice.

·        Celery seed :  Celery (Apium graveolens) is a marshland plant in the family Apiaceae that has been cultivated as a vegetable since antiquity. Celery has a long fibrous stalk tapering into leaves. Depending on location and cultivar, either its stalks, leaves, or hypocotyl are eaten and used in cooking. Celery seed is also used as a spice and its extracts have been used in herbal medicine Fenel seed. Celery seeds have been used widely in Eastern herbal traditions such as Ayurveda and Unani.Aulus Cornelius Celsus wrote that celery seeds could relieve pain in around AD 30.Though scientific evidence is lacking, it is still used as in ancient times for water retention, arthritis, and inflammation, and has seen more recent uses for reducing blood pressure and muscular spasms

·        Caroot seed :  The health benefits of carrot seed essential oil can be attributed to its properties as an antiseptic, disinfectant, detoxifier, antioxidant, and an anticarcinogenic. Moreover, it is a carminative, depurative, diuretic, emmenagogue, stimulant, cytophylactic, tonic, and a vermifuge substance.Caroot seed has antioxidant property,help to fight infections,detoxify body,improve digestion and diuretic property etc.

To be taken 5 to 10 gram once in a day morning or evening with water.